Joseph commanded his workers to fill the bags with food, and money of his brothers. Joseph asked to put his silver cup in the bag of youngest. When they were gone out of the city, Joseph send his men to verify the bags for his silver cup. Workers of Joseph opened all the bags, and found the silver cup in Benjamin’s bag. Then all the brothers of Joseph return to Egypt, to request the release of Benjamin, Judah one of the brothers request the Joseph to retin him instead of Benjamin, because of our father Israel is very old and he may die, if he did not see Benjamin our youngest brother. Then Joseph could not control himself and cried to leave that place, all Egyptians left that place. Then Joseph made himself known to his brothers, and cried loudly. Joseph asked his brothers not to fear, because God had sent me early to Egypt by your act, but it is for our good only. God want to save our family from the famine.

Pharaoh came to know brothers of Joseph have come to Joseph, then Pharaoh asked Joseph to get all his brothers and family members to Egypt. Pharaoh provided wagons and provisions for the way. Joseph sent his brothers to Canaan to get their families and Jacob their father.
When Israel came to know, that Joseph is alive he said it is enough, Joseph my son is yet alive, i will go and see him before i die.

Israel came to beer-Sheba and offered sacrifices to the God of his father Isaac. God spoke to Israel in a dream in that night and said ” I am God, the God of your father, do not fear go to Egypt, I will make you a great nation there, and i will also surely bring you up again. ” Jacob rose-up from beer-Sheba and reached to Egypt, along with family members, cattle goods which they got in the land of Canaan.
” Even though Joseph was sold to Egyptians as a slave by his brothers, he believed it is act of God to save his family members from the famine of seven years. “
~Genesis Chapter 44,45,46

Jacob‘s family members had eaten-up the corn, which they had brought from the Egypt, Jacob asked their sons, to go Egypt to get some more corn, but they refuse to go with out Benjamin. Then Jacob asked their sons, to take best fruits in the land and honey, spices, myrrh, nuts, almonds and also Benjamin and said God almighty give you mercy before the man, and he may send away your other brother and Benjamin.
When Joseph saw Benjamin with them, Joseph asked to bring these men to this house, and said these men will dine with me at noon. Joseph brothers afraid, when Joseph invited them to his house, and Joseph said peace be to you, fear not, your God, God of your father had given you money in your bags and Joseph brought Simeon with him. Joseph asked welfare of their father, they replied he in good health, as and when Joseph saw Benjamin he could not control himself, he wept there in his camber. Joseph asked his brothers to sit according to age, he himself sat with them, there after they drank and happy with him.
~Genesis Chapter 43 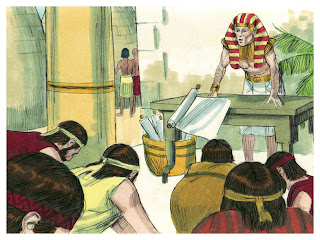 When Jacob came to know there was corn in Egypt he sent his sons to purchase corn from the Egypt, because there is a famine the land of Canaan. Joseph’s brothers came to him and bowed down themselves before him with their faces to the earth, Joseph recognized them but they did not. Joseph remember the dream which he dreamed at the age of seven years about his brothers. Joseph intentionally said ” You are Spies ” then they said we are sons of one father, 12 in number and one is not with us and another is with our father. Joseph put all his ten brothers in prison for three days, on third day he visited the prison and said all nine members can go to the country by leaving Simeon here, till you bring your youngest brother.
Joseph filled there bags with corn and money which they have tendered for purchase of the corn, after they came back to Canaan they opened their bags, they found corn as well as money, but they feared a lot and remembered God.
All the things happened in Egypt were explained to their father Jacob and requested him to sent Benjamin with them to Egypt, to get their brother released from the prison of Egypt. But Jacob said ” You have bereaved of my children, Joseph is not there, Simeon is not there and you want to take Benjamin away from me. ” Ruben said to his father if i bring not your sons you can slay my two sons, but Jacob refused send Benjamin along with his brothers.
” God has given power to Joseph to interpret the dreams of him and others. ”                                                                       ~Genesis Chapter 42 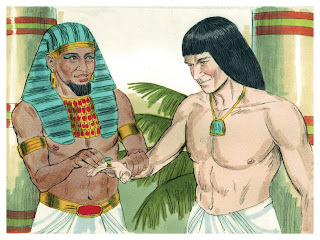 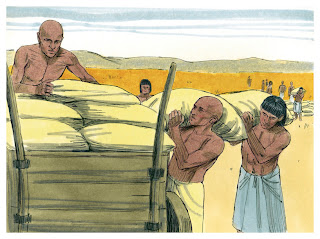 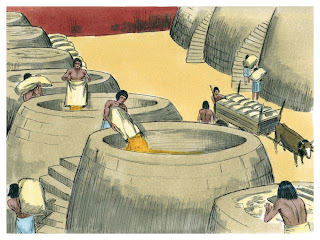 Pharaoh’s spirit was troubled, he summoned all wise man and magicians in the Egypt to know the meaning of the dream, but nobody could tell the meaning. He came to know about Joseph through butler, then Pharaoh immediately called Joseph, then Joseph said it is not in me God shall give an answer of peace. Joseph said to Pharaoh God has shewed what he is about to do and further said there will be a good crop for seven years fallow by seven years of famine. Pharaoh believed the spirit of God is in Joseph, Pharaoh appointed Joseph as overseer of his house as well as the country and took off his ring and put it upon Joseph‘s hand, dressed him with good cloth, put a gold chain about his neck. Pharaoh called him ‘ Zaphnath – Paa – Neah ‘ and gave him a wife by name ‘ Asenath ‘ , Joseph got two sons, he named first born Manasseh, for God said he has made me to forget all my toil of my father’s house, the second born was named Ephraim, that means God has caused me to be fruitful in the land of my Affliction.
Joseph visited all the land of Egypt and collected corn as the sand of the sea, which is more than sufficient for the next seven years, where the famine rules. When the famine started people of all the countries came to Joseph to purchase the grain.
” Joseph got knowleadge of interpreting the dreams because he believed in God. “
~ Genesis Chapter 41 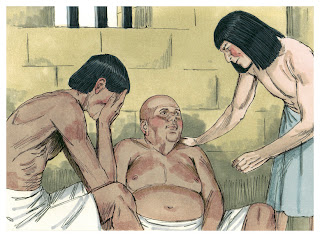 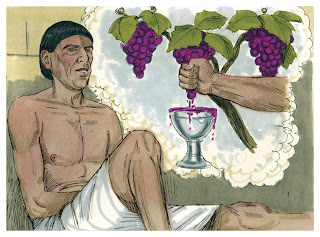 Butler told his dream to Joseph, that is ” A wine was before me, and it has three branches, it is full of buds and blossoms and full of ripe grapes, and pharaoh’s cup was in my hand, I took the grapes and pressed them into pharaoh cup, and I gave it to pharaoh’s hand. ” Joseph interpreted like this ” Three branches are three days, within three days pharaoh restore your job. “ Joseph requested the butler to remember him in the presence of pharaoh, to come out from the jail. 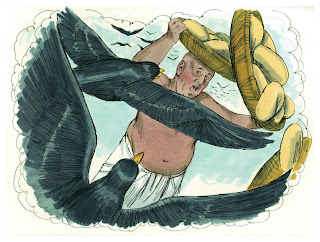 The baker told his dream like this ” I had three white baskets on my head filled with all kinds of bake-meats for pharaoh, but birds ate all of them. ” then Joseph said with in three days you will be hanged by pharaoh and your flesh will be eaten by the birds.
” God gave knowledge to Joseph to interpret the dreams because he believed, interpretations belong to God. “
~ Genesis Chapter 40 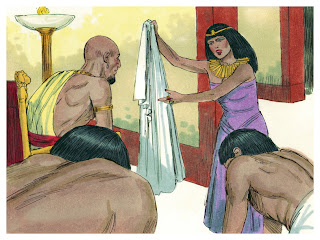