Men Multiplied on the earth, but wickedness of man increase like anything, only evil thoughts are at the heart of men. violence and corruption as been increased. God had repented for making man on the earth, and decided to destroy him from the earth but he remembered family of  Noah for their obedience towards God. 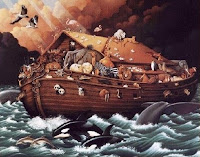 God asked Noah to prepare a ship to save himself and his family members and all kinds of living things on the earth from the flood of waters. God ordered rain on the earth for forty days and forty