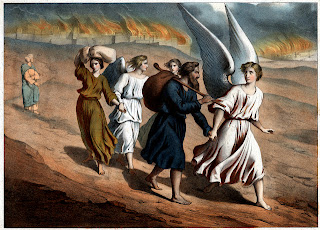 The two angels said to Lot to bring out his family members from that city, because they are going to destroy the city. When Lot requested his son-in–laws to come with him, they mocked at him and did not come. Lot along with his wife and daughters left the city of Sodom, by the help of two angels, the two angels asked Lot and his family members not to look behind, but his wife looked behind and became a pillar of salt.
God remembered Abraham and send Lot out of the city and saved the righteous, Lot reached Zoar and lived there in mountains and caves along with his two daughters.
” God never destroy honest people, who believe in God.”
~ Genesis Chapter 19