There was a famime in that land, then Issac went to Abimelech, the king of philistines to Gerar, there God appeared to Issac and said not to go to Egypt, and to live in that land only. God promised to bless him and his children, and to give all these countries to his children and multiply his children as the stars of haven.
Issac dwelt in Gerar, when the men of the place asked him of his wife, he said she is my sister. Issac feared that he may be killed because of fairness of Rebekah. Time came to pass one day Abimelech saw that Issac was sporting with Rebekah and his wife, then Abimelech called Issac, how you had said she is your sister? Issac said because i may be killed by the local people for Rebekah. 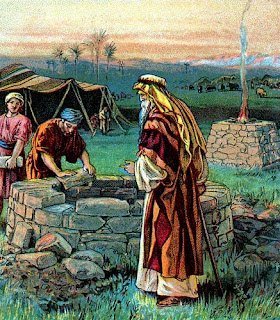 Abimelech ordered all his people not to touch neither Issac nor his wife Rebekah, if anybody touched he will put to dearth. When Issac showed he received an 100 fold because he was blessed by the God. Issac became very great he had flocks, herds and servants, then Abimelech asked Issac to leave the place and go to some other place. Issac went to valley of Gerar and pitched his tent there. Issac digged again, wells of his father Abraham, which were stopped by the philistines after Abraham’s dearth. servants of Issac digged a well and found springing of water, but the herdmen of Gerar, strove with herdmen of Issac saying the water is ours, and the herdman of Issac digged another well, for that also they strove. the herdmen of Issac digged another well, for that the herdmen of Gerar did not strive, so they named the well ” Rehoboth “ and said God made a room for us and we shall be fruitful.
Issac went to Beer-Sheba, there God appeared him and said ” Do-not fear, I am with you, I will bless you and your children for the sake of my servant Abraham “. Then Issac built an alter and pitched the tent there.
Abimelech feared about the strength of Issac and believed that God is with him, so he went Issac to enter into a covenant of peace and reached.
” When God’s Blessing are with us, we need not fear for anything in the world.  ”
~Genesis Chapter 26