On his way to his father‘s land Jacob met angels God, Jacob named that place Mahanaim. Jacob sent messengers before him to Esau his brother, to the country of Edom, with a fear of attack by Esau and offered him oxen, asses, flocks, men servants, women servants, as gift to Esau, but Jacob came to know, Esau is coming with 400 men to meet Jacob. 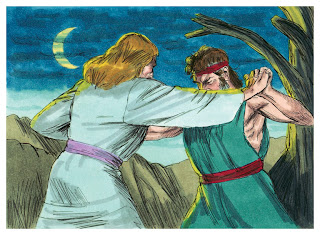 Jacob prayed God to deliver him from the hand of Esau, Jacob thought Esau may come and kill all his family, so that he divided his belongings in two groups, so that if one group is destroyed, the other group may survive. Jacob roseup in the night, took his two wives and two women servants, 11 sons and passed over the ford Jabbok, he sent that over the brook and remaind alone, there he wrestled with a man until the breaking of the day, the man who wrestled with Jacob touched the hollow of his thigh so that Jacob’s thigh was out of joint, the man said with Jacob, let me go, because the day is going to break, Jacob said ‘ I will not let you go until you bless me. ‘ the man asked him, what is your name? then Jacob answer i am Jacob, the man said, your no more called Jacob but ISRAEL, for as a prince has you power with God and with man and has prevailed. There after God blessed Jacob. Jacob name that place Peniel means he has seen God face to face.
” We should be in prayer and should leave the prayer, until we are blessed by God.  ”
~ Genesis Chapter 32