God Promised not to destroy man and all kind of creatures on the earth by the waters of a flood, to remember this Covenant God put his bow in the cloud even today we can see this before raining and after raining many a times. 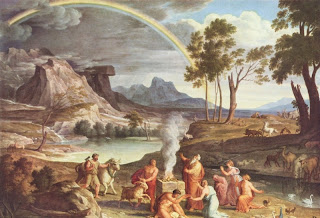 Ham one of the sons of Noah had careless behavior towards his father, he did not behave properly when he saw nakedness of his father, but other two sons of Noah Shem and Japheth covered his father’s nakedness with a cloth, without seeing his nakedness.
Noah came to know the things happened to him, when he was drunken he blessed both the sons who had covered his nakedness with a garment, and cursed Ham and his son Canaan to be the servants of Shem and Japheth.
” Because Noah is a Just man and God fearing human, his blessings and curses are happened in his sons lives “
~ Genesis Chapter 9