After the Dearth of Terah, The father Abram who died in Haran. God asked Abram to leave the country and go to a land that God will show to him. God Promised Abram to make his children as a great nation, further promised to bless the people who are blessed by Abram, and cursed the people who are cursed by Abram. As per Gods word Abram along with his wife ( Sarai ) and brothers son ( Lot ) went to the land of Canaan. In his Journey, Abram passed through Sichem, there God appeared to Abram and promised to give that land to him, Abram built an alter to the God there. 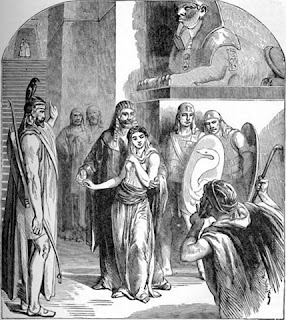 There was a Famine in that land so Abram journeyed to Egypt, But he feared that Egyptians may kill him because his wife ( Sarai ) is beautiful, so he asked wife not to revel the truth that she is his wife and asked her to tell them as she is his sister. Egyptians praised the beauty of sarai before Pharaoh, sarai was taken to the house of Pharaoh. Abram was given lot of cattle gold and silver by the Pharaoh but God caused great plagues to the family of Pharaoh. Pharaoh came to know God causing plagues because sarai is Abram‘s wife. Pharaoh sent away Abram and his wife with all his ( Abram’s ) wealth.
” God loves the people who are faith in him, and take care of the families “
~ Genesis Chapter 12