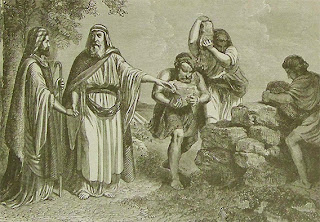 Jacob heard the words of Laban’s sons, saying Jacob had taken all that of their father’s. God said to Jacob to return to his father‘s land, Jacob called his wives and told the words of God, Jacob wives said to do what God had said to Jacob. Jacob set his sons and his wives on camels and taken all the things he got in Padan-Aram and started  to go to land of Canaan, without informing to his father–in-law. Rachel had stolen the images that were of her father. Laban came to know on the third day that Jacob was fled. Laban gathered his brothers and pursued after him seven days journey, and over took him in mount Gilead. God appeared to Laban in a dream and said to him ” You should not speak to Jacob either good or bad. “ both Jacob and Laban pitched there tents in the mount of Gilead. Laban said to Jacob, what had you done? you have carried away my daughters, as captives taken with the sword, you flee away secretly, and did not tell anything to me, i would have sent you away with Mirth, and with songs, with Tabret and Harp, and further said the God of your father spoke to me yesterday night saying not to speak good or bad with you and blamed him theft of his Gods images.
Jacob answered and said to Laban, because i was afraid, if i said, you would have taken your daughters from me by force, and refused the theft of his Gods and allowed Laban to verify the tents of all his family members, Laban did not find anywhere, Rachel managed to hide them, then Jacob said to Laban what is my trespass? What is my sin you had pursued after me? and told how he served all the 20 years honestly.
Laban said to Jacob, let us make a covenant, then Jacob took a stone and set it up for a pillar and asked his brothers to gather stones and made an heap. Laban called it Jegar–Sahadutha and Jacob called it Galeed. Laban said this heap is a witness between me and you therefore it is called Galeed. The God watch between me and you, when we are absent one another so it is called Mizpah. Jacob offered sacrifice on the mount and called his brothers to eat the bread, they ate and tarried all the night in mount. In the morning Laban rose up and kissed his sons and daughters and blessed them, then he departed to his place.
” When God is with us nobody can touch us.“
~Genesis Chapter 31