Abraham journeyed towards south and lived between Kadesh and Shur in Gerar, Abimelech was king of that country, Again Sarah taken by Abimelech because Abraham said Sarah was his sister. But God appeared to Abimelech in the dream and said you are a dead man for the women which you had taken because she is wife of a man, Abhimelech blamed Abraham and Sarah as they said brother and sisters. because Abimelech was a righteous person God had stopped him from doing sin against God. God further said to Abimelech to restore Sarah to Abraham, God said Abraham is a prophet and he will pray for you and you will live, if you did not restore you and all that of yours will surely die. 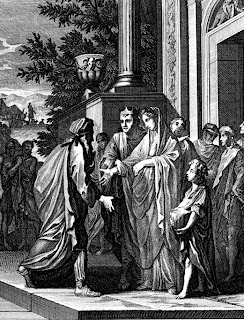 Abimelech rose early in the morning, called all his servants and told the things happened in his dream, after hearing the things all the servants were afraid. Abimelech called Abraham and said to him what had you done to us? you should not have told like that, but Abraham said, the fear of God is not there in your country, to escape from killing because of my wife, i said like that. But she is really my sister, she is my father‘s house but her mother is different and my mother is different. Abimelech gave Abraham, sheep, oxen, servants along with his wife. Then Abraham prayed for Abimelech, Abimelech and his country was blessed by the God.
” God’s presence was there in every step of Abraham because he is a righteous. In the same manner God‘s presence will be there for the righteous people always.   ”
~ Genesis Chapter 20